Due to the rescheduling of the Youth Provincials, the PCFLL Executive felt that it was only prudent to extend the Winter Season until Family Day weekend. The Winter week one schedule will be moved to Winter week 5 (Feb 5-6). Feb 12-13 will be scheduled by the league and then Family Day weekend will be for any further Winter TBR’s.

The Women’s dates remain the same.

Tomorrow (Tuesday, October 5th) is Devils Day and Photo Day. Player, team and officials (referees/umpires) photos will be taken. Please remember to bring your jerseys, sticks and gloves. Officials please also bring your uniforms. Practices will still take place for those teams that normally practice on Tuesdays.  Refreshments (pizza, chips, juice) will be provided to all teams (players, coaches, managers) and officials following their photo session.

A limited stock of Devils apparel, including shorts and socks, will be available for purchase. Cash and e-transfer accepted only.  Pre-orders for other Devils clothing will be taken.  Please note we have several new items (e.g. umbrella, sweatpants, crewnecks) this year.  Please stop by the clothing table to check it out.

Ty Yanko, our U18 Head Coach, will conduct a coaches clinic for any Burnaby coaches who wish to attend during the normal U18 practice on the field from 6:30-8:00pm. He will demonstrate drills and exercises he likes to use and may be able to make some suggestions on how coaches can add these to their practices.

See you all there!

In observance of this important day, the Burnaby Field Lacrosse Club has asked the teams choosing to hold practices this week to take the following actions:

Welcome to all the Burnaby Field Lacrosse Club (BFLC) Families!

Today marks the start of our season for the Burnaby Devils. Your coaches should have contacted you by now to let you know the practice schedule for your team. Depending on which team you’re on, you will have a practice on either Tuesdays or Thursdays. I have attached the schedule here and it’s also available on our website:  Practice Schedule – Burnaby Field Lacrosse Club.

Our home field is Field #3 at the Burnaby Lake Sports Complex West at 3677 Kensington Avenue, Burnaby, BC V5B 4Z6.

We will be distributing shorts and jerseys at next week’s practices. Socks and other clothing will be available for purchase at a later date. Picture Day/Devils Day will be on Tuesday, October 5, 2021.

Once game schedules are available, your Team Managers will notify you. Games are currently planned to start on the weekend of September 18/19.

On behalf of our Burnaby Field Lacrosse Club Executives I am excited to welcome you to a new season of field lacrosse!

Registration is now open for the 2021/2022 field lacrosse season. I know you are all excited to get your kids on the field and the Burnaby Field Lacrosse Club (BFLC) welcomes you back!

Currently, the plan is to start with no restrictions to practices or games.  This is dependent upon COVID-19 infection and hospitalizations rates remaining low.  Updates can be found on the links below as they become available:

We are maintaining registration fees at the affordable 2019 rates for this season. The fees can be found on our website at www.burnabyfieldlacrosse.ca. Register before July 31st to get the early bird rate! Again, this season the club is only accepting Interac eTransfers for registration fee payments.

The Club is always in need of coaches. Both returning and new coaches are encouraged to apply using our Online Coaching Application Form at:  https://go.teamsnap.com/forms/277340.

We look forward to seeing everyone at the field in September. 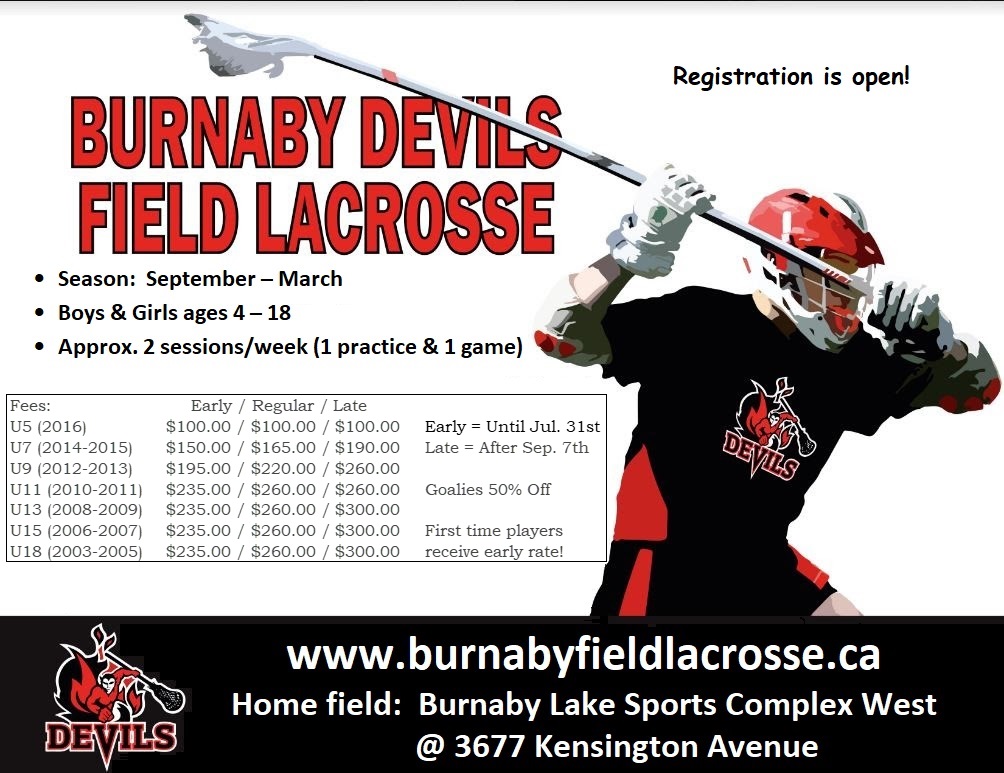 Message From Past President, Brad Romano

On the evening of May 3, 2021, your BFLC Executive has confirmed Simon Gee as the new President of Burnaby Field Lacrosse Club. Congratulations to Simon, a long time executive member and volunteer with both our club and the Burnaby Lakers Minor Lacrosse Club. As per the club bylaws, the executive may confirm someone to a role if that role is vacant at any time during the term or if not elected at the AGM.

At the recent Pacific Coast Field Lacrosse League I was nominated for the role of Chair and I accepted the nomination and the role. It was a difficult decision to leave the Burnaby executive with a year left. However, after discussion with, and encouragement from, the executive, I decided to take the plunge.

Your current executive is a dedicated group of individuals with whom it was my pleasure to work with for the past 3 years as President. We have parents from all age groups represented on our board – all of whom contribute in various ways with the club and with our League.

Thank-you to all our families, players, coaches, managers, past executive, and other club volunteers that have been involved over the past years. The club does not run without volunteers at all levels.

The past year has been a stressful one and I, for one, look forward to what we’ll be able to do in September as a League.

With my thanks and best regards,

Please join your 2020 Executive for a year in review, an update on our upcoming season, and the election of a new Executive. At this time, no new changes to the Club Operating Policy are being considered.

The Club is once again in need of volunteers to ensure our programming can continue into the years to come. The roles that must be filled with an election at the AGM are:

With regards to the Executive positions:

The Burnaby Field Lacrosse Club Executive Board meets once a month, every month throughout the year. Each meeting lasts no longer than 2 hours. We are a working Executive, fulfilling volunteer roles as needed.

Coaches for the upcoming season, please have one representative from your team attend the AGM.

The full AGM details are as follows:

Attendees will be placed into a meeting lobby from 6:30 pm onward and we will do our best to open the meeting at 6:50 pm. Attendance will be taken and anyone that does not identify themselves as requested or is not a club member will be removed from the meeting.

Questions can be directed to Simon Gee.

We hope to see you there.